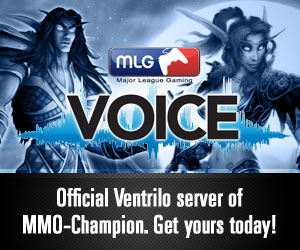 Underground Kosmonavts (EU - Ravencrest) killed Algalon in 10-Man (2nd World Kill) and promptly released a video of their fight! This is the first time we get a chance to see the fight entirely and you should definitely check it if you plan to fight Algalon soon .... After Patch 3.1.3?

Below you will find the patch notes for the next minor content patch. As we do not intend to release this patch on the public test realms, we thought wed share the notes with you ahead of time. Please be aware that these changes are subject to revision until the patch is officially released.

Strijder and Bekstinker were a bit bored and decided to kill The Flame Leviathan in 10-Man .... without anyone else. After 20+ wipes because of bugs they finally took down the first boss of Ulduar with only 2 people and 1 vehicle, congratulations to them!

Int vs. Spirit
You are rarely choosing between just Int and Spirit. It's also fine if you prefer Int to Spirit. The danger comes when you say "My gear is junk because it has Spirit on it." That is what paladins are saying about MP5. Our stance is that's not a problem with the gear -- it's a problem with the stat not being attractive enough. We already run the risk of PvE gear being as homogenized and well, boring, as PvP gear. We need to use all of the stats we have available or every tier of healing plates is going to be "Your previous tier, plus 10% more Int and Crit." (Source)

Overpowered talents
No, it doesn't become irrelevant, at least in our minds. Here are a few of the problems you run into when some talents are enormously more powerful than others:

1) The talents that "only" provide a 1 or 5% dps increase are viewed as garbage. Players might skip them. They might make the rest of the tree feel lame, which risks players not finding the tree very fun. Think about it this way: if your breastplate had 500 strength on it and your bracers had 10 strength on them, would you even care about the bracers? Would you campaign to get them buffed? Would you make "Lol nobody cares about bracers" posts.

2) Other classes wonder why their 51 point talent can't provide such an enormous benefit. They think warriors are overly favored or that developers didn't spend much attention on their trees. Now, we ignore QQ as much as we can, but also ideally players are excited about their classes, and ignoring even a hint of favoritism can go a long way. Despite our best intentions, talents still have grown more and more powerful over time. Compare an old talent like Improved Heroic Strike to a new one like Fire and Brimstone. We want to keep the inflation under control while possible, or +10% becomes the new standard by which talents are measured.

3) Power increase isn't constant. When you can suddenly get your 51 point talent, your dps shoots up enormously. A level 60 warrior could do much, much higher dps than a level 59 warrior.

4) Here is the most important one. We thing the game works better when talents don't make up too large of a player's power allocation. It makes gear drop feel cruddy when so much of your power comes from talent allocation. It makes enchants, tradeskills, buffs and other parts of the game feel paltry by comparison because you are so powerful just by a passive increase to your talents. It means picking the "wrong" spec is brutal instead of just sub-optimal.

Now there are other considerations of course. In the case for Hunger for Blood, we think having an overpowered talent is preferable to the alternative. There are talents like Ruin that provide an enormous dps increase and we live with that. (And to be fair, Titan's Grip is still overpowered even with the 10% penalty but it's less overpowered than without the penalty.) If we could find no other way to improve Fury dps, then I'm sure we'd look at TG. But there's a lot of the tree we can improve. (Source)

Reverting it back to always going off on immune targets and just not affecting that target certainly isn't off the table. (Source)

Paladin (3.1 Skills List / 3.1 Talent + Glyph Calc.)
Making Flash of Light useful again to "fix" MP5
To be clear, we think that's a problem. When the toolbox isn't large, it's important that every tool does something. The solution is just a little tricky. Nerfing HL won't go over well, but buffing FoL just risks making paladins overpowered. To fix this, which we might do, we have to tweak carefully. (Source)

Mana regeneration and MP5
We nerfed a lot of regen mechanics in between T7 and T8. Players were worried about regen being too low so we made sure the stats were there. It appears that players aren't having mana problems on the normal encounters but are having to be more careful on the hard modes. So we need to get some more hard mode data. (Source)

Changing game mechanics to make MP5 more wanted
I'm convinced the best option for Blizzard to make MP5 matter would be to:

Yes. Changes like that would make MP5 more meaningful without removing potentially fun mechanics like Illumination or DP. (Source)